Crowhurst Nature Reserve is a four and a half acre community-owned woodland in Crowhurst, East Sussex, known locally as Quarry Wood. It was bought by the village for the village in 1999 to protect and preserve it.

Paul Johnson is the warden and has been writing a series of articles called Tales from Quarry Wood for the village magazine since 2008. Our little reserve is the central thread and star turn, but his themes often range further, taking in ecology, botany, mycology, history, mythology, Latin and literature. All with a healthy dose of irreverence and the odd bit of Hitchhiker’s Guide to the Galaxy.

Click here for more about Paul and Crowhurst Nature Reserve; the most recent article is below  and you can explore all the previous articles through the chronological year tabs above or take a more meandering approach using the tags.

Hello everyone. Well in the end, our merry month of May gave us the much-needed showers we missed in traditionally soggy April. The rain certainly brought out a lustre to the foliage, already positively glowing with several shades of newly created chlorophyll green.

The unseasonably dry start to the year did not prevent some magnificent displays of wildflowers. The recent rain did nothing for the pond in Quarry Wood, which is nothing more than a muddy wallow, but, as I write this, the Yellow, or Flag, Irises (Iris pseudacorus) are in full bloom and certainly catch the eye amidst the greenery of our little reserve.

As I mentioned last month the local woodlands were carpeted with an expanse of Wood Anemones and Bluebells. Now that the canopies have closed over throwing the forest floors into months of chiaroscuro, those floral quilts are nothing but a layer of flattened, yellowing leaves and dry looking stalks carrying the end product, or is it the beginning, of the whole process, seeds.

In fact, neither Wood Anemones nor Bluebells will be relying on seed production to come back next year, as they are Perennials. They utilise root stocks and bulbs respectively to pop up through the leaf litter and, in a stable environment, will continue to occupy the same spot year in, year out. They produce relatively few seeds in the way of a backup plan and thus take a long time to recover in times of stress. This is yet another reason to stick to footpaths and not to trample over wildflowers, the damage can literally last for years.

As we walked along verges and hedgerows there was another flower much in evidence this spring, that of the Garlic Mustard, also known as Jack-by-the-Hedge (Alliaria petiolate).

If in your perambulations you happened to notice a small number of these delicate, four-petalled flowers, do not count on them being in exactly the same place next year. For these are Biennials, plants that take two-years to complete their lifecycle. One Garlic Mustard plant produces hundreds of seeds that can remain viable underground for up to ten years before germinating. In the first year the plant grows into a low-lying rosette of heart-shaped leaves. These remain green and photosynthesise throughout the winter, as long as temperatures remain above freezing. The second year sees the growth of the stalk, up to a metre in height, with its clusters of snow-white flowers. The leaves become triangular in shape with toothed edges and, as I am assured, make a mean pesto!

By now our feathered friends are busy with their demanding offspring. Last month I whiled away a few hours with my binoculars in QW watching a pair of Great Spotted Woodpeckers (Dendrocopos major) attending to a very vociferous chick. Sadly, our severely diminished pond means that, yet again, we have no nesting Mallards or Moorhens, and we won’t be treated to the sight of little powderpuff-like chicks scurrying over the water plants.

Now, carrying on from last month, let us have a brief look at another bird on the Red List of endangered species we can hope to see this summer. Along with ten other species, the House Martin (Delichon urbicum) was deemed to be of conservation concern and transferred to the List in December 2021.

Martins belong to the Order Passeriformes and lead similar lives to Swallows and Swifts, spending the winters in Africa and flying over in March and April to their traditional nesting sites. The smallest of the trio, House Martins are a blue-black colour with a white underside; the tail is forked but without the distinctive streamers of the Swallow.

Before the 20th century they built their mud nests on cliff faces. As the human population in the UK increased, the birds changed their nesting habits and utilised manmade structures, usually under the eaves of houses. House Martins are greatly affected by the weather. If it is not wet enough, they cannot collect the mud to construct their nests, if it is not warm enough, they suffer from a lack of food, namely the flying insects they devour as they swoop over wetlands and shorelines. Along with the vagaries of the weather, modern building styles and barn conversions created a dearth in suitable nesting sites resulting in an approximate fifty per cent reduction in population numbers since 1970. I can confirm that the Swifts are back, hurtling through the air over the marshes, it would be wonderful to see the charming House Martin closer to home again.

Finally, we have a first-hand account from one of our own, Lorna of TQW fame, of a rare sighting. Whilst strolling on the local marshes, she was waved down by a very excited gentleman with a ’scope. He had spotted a Temminck’s Stint (Calidris temminckii) no less! This is a tiny wading bird, that breeds predominantly in the Arctic and is an infrequent visitor to our shores. It is estimated that on average 100 individuals only pass through in migration each year.

So, a lesson learned, do keep watching the skies, who knows what you may see. Enjoy the transition from spring to summer, for this is the time of flowers and birds!

A little yellow Bird above,
A little yellow Flower below;
The little Bird can sing the love
That Bird and Blossom know;
The Blossom has no song nor wing,
But breathes the love he cannot sing.
The Duet – John Bannister Tabb (1845-1909)

The harmony of Ma Nature’s realm beautifully summed up!

In my last scribble I talked about the fifth Birds of Conservation Concern report and the new additions to the Red List, those birds that are now at the highest level of extinction risk. I now want to concentrate on one of those birds, one we may be lucky enough to see in the next few weeks. The Swift (Apus apus) is a summer visitor to our shores though you could argue that, as they breed in the UK, they are actually coming home from Africa in the spring. The life of a Swift is extraordinary, most of it being spent in flight. Yes, they eat, mate, bath and even sleep on the wing!

Perhaps most noticeable at this time of year are the birds, as they treat us to their sweetest songs before scurrying around for nest material. I noticed that the male Blackbird (Turdus merula) visiting my garden for the third year running, has added to his repertoire. Instead of constantly repeating a striking three-note refrain throughout his mellifluous song, he has replaced it with a more complex five-note refrain. Admittedly, my assumption that it is the same bird is based solely on the fact that the original snippet of song still crops up every now and again.

Eunice Newton Foote (1819-88), scientist, inventor and staunch campaigner for women’s rights was born in Connecticut, USA. A distant relation to Sir Isaac Newton, she was introduced to the sciences at the Troy Female Seminary in New York. Throughout the 1850s, her curious nature led her to carry out a series of tests on the interactions of sunlight on various gases. Her experiment designs were not sophisticated, nevertheless they enabled her to reach some important conclusions regarding CO2 and Earth’s history.

Quarry Wood’s Paul Johnson and Fr Michael Brydon (formerly of this parish) are both massive Sherlock Holmes fans, but rather felt it remiss that Conan Doyle had failed to send Holmes and Watson to Crowhurst in any stories. They decided they should rectify this…

The Mystery of the Purple Emperor

Set in Crowhurst in 1909. Holmes and Watson are summoned by village rector and famed letter-writer, the Rev’d James Bacon-Phillips, to assist Lieutenant Colonel Papillon of Crowhurst Park, who has been receiving ominous butterfly wings in the post.

Set in Crowhurst in 1913. Military hero turned original Scoutmaster, Lieutenant General Baden-Powell, lives in nearby Ewhurst Green. Having persuaded a Crowhurst military colleague to host a Scout Camp at Crowhurst Park, he then faces a delicate problem that requires the insight of Holmes and Watson.

Set in Crowhurst in 1922. A railway loving boy from a school in nearby Hawkhurst is staying at the Rectory; Holmes is called upon to investigate his disappearance. A boy who hears poetry in the trains, who imagines voices in the whistles, and who grows up to become the Thomas the Tank Engine author.

More Scarlet Elf Cup than we have ever seen before! Bursting from mossy deadwood in the middle of winter, these glorious red beauties always create a truly eye-catching fungi display on the side of the old railway line. The patch has been growing significantly in the last few years and now there is about a 10m stretch of really dense fruiting bodies, and the odd one or two popping out further along.

A photo could not do it justice, so we tried a video. Forgive the shaky camera work and the occasional glimpse of my wellies, but hopefully this will give you an idea of scale, of the simply astonishing quantity of the scarlet gems… 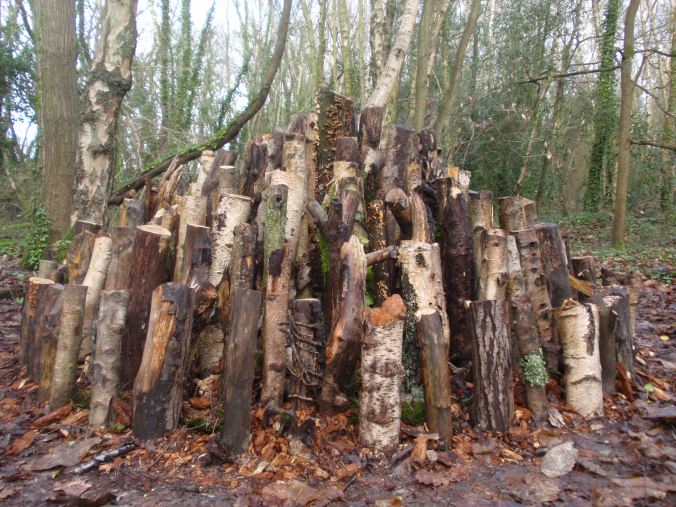 Including the bright blue velvet of Cobalt Crust.

Quarry Wood’s Warden, Paul Johnson, gave a talk at the AGM of Crowhurst & District Horticultural Society on 7th October 2016. Click here for the slides outlining the history of our little Reserve and showcasing some of the beauty…